Aspire to Inspire: A tale of dentures, etrogim, and Sukkot 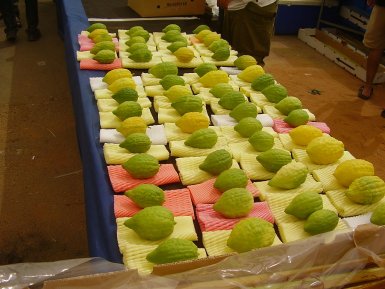 One of the best perks of being on staff at The Jewish Education Project is the simplest; the opportunity we have to connect with so many other Jewish educators. Our work brings us in contact with a wide range of Jewish educators, whether it be in person at one of our offices, virtually at a webinar or network meeting, or at a large scale event or conference.  Sometimes the connection is wide and deep in the context of a consulting or long-term initiative and other times the connection is a quick exchange of a few words and a smile. These brief exchanges are full of potential, they’re the first step towards reaching the aspiration of our mission, to inspire and empower Jewish educators to create transformative Jewish experiences. Of course, there is much to do beyond the initial connection, but it’s a solid start.

I’ve been thinking a lot about what it takes to inspire and empower others. It requires intentional placement of our focus, energies and attention. It brings to mind a story I heard recently of Rabbi Aryeh Levin, or Reb Levin as he was also known, that occurred during Sukkot.

Reb Levin was well known for his visits to members of the Jewish underground imprisoned in the Central Prison of Jerusalem during the British Mandate and was also well known as the “Tzadik” (or Righteous One) of Jerusalem” for his work on behalf of the poor and the sick.  He was also well known for his meticulous observance of each of the ritual commandments. Two days before Sukkot, he went to a religious neighborhood in Jerusalem to choose his etrog, lulav and other items for the Four Species. Word got out that Reb Aryeh was there, selecting the Four Species and soon a large crowd appeared, fascinated to see what criteria he would use to select his etrog. It’s referred to in the Bible as eitz hadar, a beautiful fruit, and since we are instructed to “beautify the commandments”, particular care is required to choose a beautiful etrog.  It’s not unusual to see someone to spend a lengthy amount of time deciding between options.

The crowd of people were amazed to see that Reb Aryeh quickly chose between two etrogs, and purchased it along with the other three species, taking less than five minutes for the entire transaction.  The crowd dispersed, imagining that the great rabbi had a very important meeting to have made such a hasty decision on such an important purchase.  One person decided to follow Reb Aryeh and see where he was going, to see what could be more important than choosing an etrog for Sukkot.  He followed him as he walked into a senior citizen residence and waited outside.  The rabbi exited 90 minutes later, and the man approached him. “Kavod haRav, respected Rabbi, please don’t think me rude, but I want to better understand some Torah; on Sukkot we’re commanded to have a beautiful etrog.  I know that visiting elderly is also an important mitzvah, but they will be in this residence during the entire holiday of Sukkot and after it as well, and purchasing the etrog is a once a year opportunity.  I am confused why you spent such little time choosing it.” According to the story, Rabbi Levin took his hand, smiled and explained, “There are two mitzvot which the Torah uses hiddur (beautify).  One is the mitzvah of a beautiful etrog, pri etz hadar, and the second is beautifully honoring the face of the aged, hiddur pnai zaken.  I know that the etrog is an object and the elderly individual is a subject, a human being.  There is someone I know here who had asked my help to select dentures.  He has been waiting to return to the familiar enjoyment of delicious foods, and it was more important that this not get delayed further. I chose to spend more time beautifying a commandment relating to a person over beautifying a commandment relating to a fruit.”

This story is moving on its own (who isn’t moved by an act of human compassion towards the elderly!).  I feel it’s especially touching as it models several ways how an inspired and empowered educator can transmit Jewish learning.  Consider:

This story invites me to imagine how our schools will look when Jewish educators are inspired and empowered, and the potential far reaching impact on their students and their families. One side street conversation between teacher and student may be all that it takes to make this difference.

May we all continue to enjoy the hiddur of our etrogs and four species, the tranquility of the sukkah, and the hiddur that is created by inspired and empowered educators throughout the year.

Abby Pitkowsky is Director of the Westchester Region and Israel Education for The Jewish Education Project.

Photo by Dr. Avishai Teicher/Pikiwiki Israel and is used under a Creative Commons Attribution 2.5 Generic license.