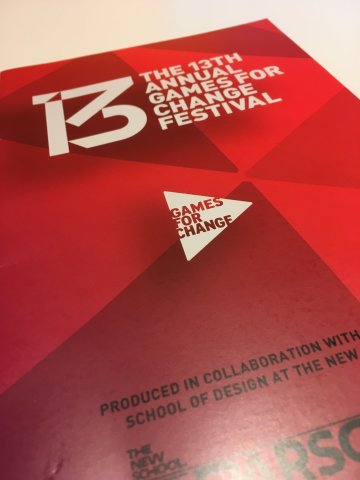 Every year, gaming enthusiasts gather in New York for a few days to learn about and play at the Games for Change Festival (G4C). The event draws designers, coders, teachers, professors, researchers, and recreational gamers with an interest in using the power of games for social change and education. This year, attendees met at The New School to examine three tracks - Games for Learning, Neurogaming and Health, and Civics & Social Issues. As DJLN’s resident gaming geek I checked out the festival to see what is new and interesting in educational games.

Among the many exciting sessions at G4C, here are a few highlights I particularly want to share with you all:

1. Mission US: City of Immigrants game

Part of the festival is the annual Games for Change Awards. One of this year’s finalists for Best Learning Game was the newest installment of Mission US by game developer Electric Funstuff. Created for middle and high school classrooms the game provides interactive experiences aligned with the National Standards around important moments in US history. Each installment comes with an Educator’s Guide that includes resources and activities like primary source documents and project ideas that help connect the games to broader social and political issues.

This year’s newcomer, Mission US: City of Immigrants puts players in the shoes of a young Jewish immigrant from Russia in New York’s Lower East Side in 1917 to focus on the immigrant experience and the growing labor movement of the time. The broader goals of the game are to help students understand and think critically about history, develop empathy, and understand the role of ordinary people in shaping the ideals of liberty and equality in the US.

The game was developed with the help of historians from the American Social History Project and the Center for Media and Learning at NYU. Research on its effectiveness was done through focus groups and testing by the Center for Children and Technology and the Education Development Center.

There’s a lot of talk about formative assessment these days, and about how technology can help make it more effective and meaningful. In this panel, speakers from educational game design companies explored the possibilities for using games as a part of classroom formative assessment. The group focused on the importance of games providing feedback, some sort of component that reports to teachers how the students are doing in their play. This allows for more meaningful use of games not simply as supplemental aspects of the classroom but fully integrated pedagogical tools.

In one great example, Abby Speight, the director of product at Zynga.org discussed using the company’s new game Words with Friends EDU for vocabulary building and formative assessment. The program is already being used in many classrooms and independent research has demonstrated that after playing just six games of Words With Friends EDU, students showed significant gains in their use of vocabulary words. The game is built on the already successful Words With Friends platform, but takes it farther by focusing on incentivizing vocabulary learning, scaffolding for struggling students, and including a robust dashboard for teachers. The dashboard provides reports on student progress against Common Core standards.

Another upcoming game with a lot of potential is Eco from Strange Loop Games designer John Krajewsky (@jkrajewsky). Built for use in science classrooms, Eco has students collaboratively build a virtual world over the period of thirty days by using limited resources and scientific data generated by the simulation. The game focuses on concepts like data analysis, resource management, ecology, and the impact of human civilization on the environment. A hands on simulation allows students to experience these concepts in a concrete situation to promote deeper understanding and increase the potential for knowledge transfer.

Play is a powerful method for young children to explore their world and learn. This panel brought together designers, researchers, and producers of children’s media to discuss the needs of early learners.The panel suggested a few specific things teachers, mentors, and parents should keep in mind when looking for high quality learning games for their youngest learners.

One seemingly simple, but often forgotten point, is that products for early learners should deemphasize, or even altogether remove words, particularly for instructions. Communicating without words and emphasizing other ways to teach through pictures, animations, and videos is important with the youngest players.

Another suggestion from the panel was that adults seek out games that allow learners to imagine, create, and produce, not only consume media. Children, especially younger ones, learn best in interactive, hands-on environments, and that holds as true for games as it does for classrooms.

Last but not least, the speakers stressed that ideally, young children would co-play games with adults, allowing adults the opportunity to scaffold and advise as necessary. However, when that is not possible, a great feature to keep an eye out for is some form of “breadcrumbs” that are left from play for adults to review later. This could be in the form of screenshots or pictures players take, question prompts for later based on their play, or scoreboards of some sort. This type of information will help teachers and other adults follow up on the play experience later and help make it more meaningful.

The rest of the sessions from G4C can be viewed here on the G4C YouTube channel. I would recommend checking them out. In particular, I suggest these two to learn more about advances in informal education spaces as well as inclusive game design:

Session - Co-Designing Museums of the Future

Tatyana Dvorkin is Director, DigitalJLearning at The Jewish Education Project.