Grieving For A Far Away World on Tisha B’Av 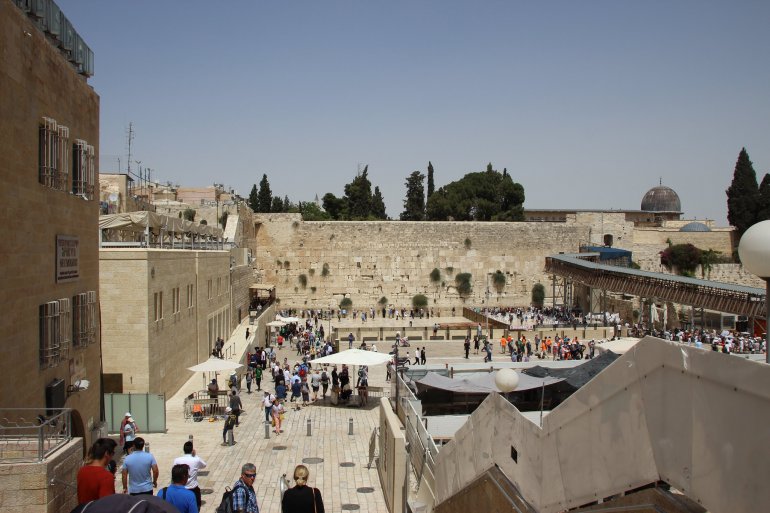 My experience with Tisha B'Av, and the book of Eicha (Lamentations)  in particular, has always been challenging. I do feel obligated to profoundly experience aveilut (mourning), to feel as though I am grieving on some visceral level, but the antiquity and remoteness of the destruction make it hard to access those emotions, let alone make them palpable for our students and campers.

On Tisha B’Av , we're asked to cry about a bygone era and yearn for an abstract Jewish future— and those are difficult actions and feelings to compel in a generation of people for whom the outermost wall of the Temple has always been the backdrop to some of their  best family photos. Even when we are hard at work in summer camps, as much as there are efforts made to relay the day's austerity, it is often marked by grouping sleeping bags in front of cabins and candle lit renditions of Eicha. As a result the story of our Temple and exile are vaguely attached to fun experiences in our camp memories, like bonfires, camping trips, and color wars.

During the  25 hour fast, we make our way through having absorbed the knowledge that ours is a desperate and oppressive history and that we remain in exile. And we're supposed to really, truly feel that. As educators, we are supposed to help our campers and students access these feelings of sadness and loss. Yet, I always question the extent to which we do.

In his article, "Avelut Yeshanah and Avelut Chadashah," which is a masterful comparison of personal and communal moments of mourning, Rabbi Joseph B. Soloveitchik makes a gorgeous and fascinating distinction. He says:

“There is no archeology in Judaism. There is history but not archeology. Archeology refers to something remote, a dead past of which I am not part. It arouses my curiosity; I am inquisitive to know about the origins. But history to us means something living, past integrated into present and present anticipating future.”

Soloveitchik goes on to label the way in which we force ourselves to experience national memories as "unitive time consciousness," and says that it is "unitive in the sense that there is a tightening of bonds of companionship of past and present."

Reading this, I began to think about what makes our era of Jewish political sovereignty in Israel and a thriving diaspora community in North America the companion of our ancestors'. What within Eicha achieves that and what, from an emotional standpoint, might forge this so-called companionship between past and present such that the mourning of the Temple Era would be accessible to us.

When I reread Eicha (Lamentations), I noticed that the text is not focused on the details of the Temple's destruction. Nor is it focused on the archeology of the place or on our enemy, the Babylonians. Instead, it's about Jerusalem, her people and her God. The sorrow that is expressed throughout Megillat Eicha centers on God's anger towards Jerusalem and on the city's feelings of alienation. On our feelings of alienation.

So if, from an emotional standpoint, Jewish educators  were to bond our present to the past and to make companions of our story and our ancestors', I would suggest that we look at our relational narrative. Not our historical one. Of course we can't relate to the destruction of the Temple. We weren't there. But, perhaps, Jewish educators and Jewish learners, especially after the terror of Pittsburgh and Poway,  can relate to the hearts and minds of a people and city searching for answers, mercy and salvation.

Maybe, during the time of the Temple's destruction, the relationship between God and man was taking place on some shared plane, on some national level, and maybe, back then, it was rooted in aliyah l'regel (annual pilgrimage) and the Temple. And while, today, our learners may think about their relationship, or lack thereof, to God on a personal level more than on a national one, the same deeply theological questions are the ones that still animate us as they did then. Where is God? Has God abandoned me? What is the place of faith in my life? What is the relationship between that faith and the ways in which we gather at synagogue to practice this tradition? Does faith compel behavior and ritual? And what I find really fascinating- perhaps most of all- the question of the extent to which we can appeal to and make demands of God, whether or not we are marked by sin and wrongdoing.

Eicha begins with the words "How does the city sit solitary, that was full of people! How has she become as a widow! She that was great among the nations, and princess among the provinces, how has she become tributary." It begins with a vision of Jerusalem's loneliness and isolation and is littered with admissions of guilt regarding the wayward city and people's wrongdoing. Yet, the book ends with a demand, "Return us, oh God, to you, and we will return."

Maybe, more than any of the other relational descriptions in Eicha, this is the most accessible. The begging and demanding of a people for redemption in spite of whether they're deserving.

Who are we today? How removed are we and our learners from the sanctity of the Temple Era? Or, perhaps that doesn't matter if, in spite of all of the historical differences between then and now, we, like our ancestors, most deeply yearn to overcome our isolation, to feel animated by faith and forge a relationship with our city, our land, each other and God.

Malka Fleischmann, is Director of Knowledge and Ideas for The Jewish Education Project.