Skip to main content
Dec 21, 2018
By
The Jewish Education Project 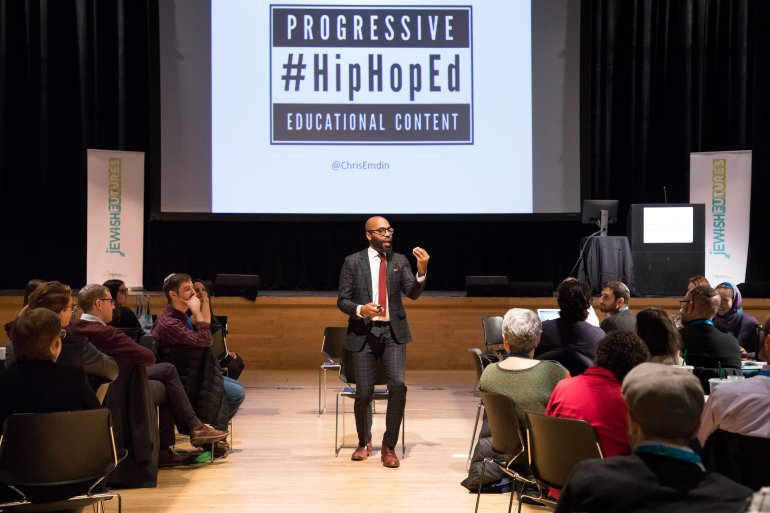 Shifting power dynamics, student empowerment and rethinking Jewish rituals and texts were the major topics of conversation at the Jewish Futures Conference 2018: Power to the People. Over 300 Jewish educators and communal professionals packed into Columbia University’s Lerner Hall on Dec. 20 to hear presenters from the fields of philanthropy, business, theater, and education discuss new cultural power dynamics in the 21st century.

Henry Timms and Jeremy Heimans, the keynote presenters and authors of the ground-breaking book “New Power”, discussed how cultural and political power in the 21st century is fundamentally different than power hierarchies of previous centuries. Their model of ‘New Power’, rooted in peer collaboration and mass participation rather than a top down structure, is reshaping the way society thinks about everything from activism to business. The authors believe that the lessons of ‘New Power’ are valuable to Jewish educators.

“The future of Jewish education is all about understanding the difference between old power and new power,” Timms said.

While examples of movements and companies grounded in the philosophy of ‘new power’ are on the rise, old power is still present Heimans and Timms said. They emphasized that educators and institutions need to blend the two approaches.

Rabba Yaffa Epstein helped attendees discover the struggle between old power and new power in traditional Jewish texts. She guided the audience through a text study from the Talmud, Brachot 10a. The text told the story of how Rabbi Meir’s wife Berurya changed her husband’s opinion by grounding her argument from text in the book of Psalms.

“Not only does the Talmud give us an outsider voice here but it gives one in direct relationship to the old power structure. It is new power [and old power] in constant and close relationship,” said Epstein, the director of education for North America at the Pardes Institute of Jewish Studies.

Yavilah McCoy challenged the audience to examine the power dynamics of Jewish educational settings. McCoy, the CEO of Dimensions Educational Consulting, explained that Jewish students of color face systemic, cultural, and interpersonal challenges in Jewish education that often go overlooked. Some symbols in Jewish communal settings, such as police guards, could be unwelcome intrusions for Jews of color who have had negative interactions with law enforcement. Many Jewish educators, school administrators are unaware of the systemic inequalities rooted in Jewish institutions she said.

“Guide students to see and experience each other and the world through the lens of more than one story or narrative. We discover conscious and unconscious biases when people have opportunities to interact cross-culturally with others who are different from them,” McCoy said.

In the true spirit of new power, audience members shared their reflections on how 21st century power dynamics can impact Jewish education.

“What if we thought not about what we want [students] to know about but about what they want to know? How we can give them the skills to learn and create,” Rabbi Isaac Saposnik asked attendees during an open mic session.

Throughout the day, presenters emphasized the importance of taking pedagogical risks and empowering students. Dr. Christopher Emdin, a professor at Columbia University’s Teachers College, challenged educators to stretch their pedagogical limits. “Take the risk to go into pedagogy you have never seen or heard before,” he said. “The best teaching and learning is the construction of a mechanism where the young folks are informing  you of what you can do for them.”

Valerie Weisler, CEO of The Validation Project, told the educators in the audience to take off their “authority hat and dismantle the hierarchy between student and teacher.”

In the 21st century students should not slowly gain power but accumulate it as soon as they are ready said Delaney Tarr, a survivor of the shooting at Marjory Stoneman Douglas High School in Parkland, Florida.

“We need to foster the power and passion of young people everywhere not just after they experience tragedy but from the first moment they understand how the world works,” she said.

The 2018 Jewish Futures Conference: Power to the People was sponsored by The Jewish Education Project and Lippman Kanfer Foundation for Living Torah.