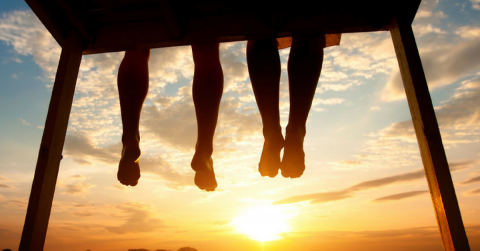 In many cultures and societies around the world and far back into antiquity, the word used to describe this most treasured season is derived entirely from a description of its weather. Is that all the summer is about? Heat? Here in Israel, one could certainly argue that heat is the dominant feature of the summer. Indeed, many hikes and trips are cancelled due to the extreme heat and a government issued “Ometz Chom” or “Heat Advisory”. But as an educator, I’d like to believe that summer is about so much more than just the heat.

There’s a certain magic in the air when summer begins, a certain feeling that can’t be found any other time of year. It’s not just because of the heat or vacation from school. The Jewish People and our sacred texts have referred to this time of year as “kayitz”. “Kayitz”, the Hebrew word for summer, shares a root with the word for “end”, “ketz” and the word for “chopping wood”, “katzaz”. One possible explanation for the similarity is that summer was the time in Ancient Israel when trees would be dry enough to be chopped for firewood. Rabbinic sources even point to Tu B’Av - an ancient holiday falling smack in the middle of summertime - as the optimal time to bring firewood to the altar in the Temple in Jerusalem.

On the surface, this description can appear rather depressing, a once beautiful tree, now dead and dried, with it’s long life ending by being chopped up and consumed by fire. But, in actuality, the holiday of Tu B’Av is described by the Mishna as being the happiest day of the year. And there’s a way to reconcile this.

There are two words which we often use interchangeably, but which have very different meanings: “end” and “complete”. When something ends, it is often sad, but when something is complete, it is almost always happy. Projects, marathons, books--when you complete these things, you feel a sense of accomplishment, and you grow from the experience.

The journey of the trees mentioned above is completed in the summer - their ultimate purpose is to serve as firewood in the holiest place in the world; what an honor! At the moment they are chopped down, they are, in effect, being completed - brought to their true purpose in this world.

This is what a “Jewish Summer” is all about: putting the finishing touch on all that we’ve done throughout the rest of the year, and coming one step closer to completion, peace, and fulfillment.

This is what summer is all about, and specifically what a “Jewish Summer” is all about: putting the finishing touch on all that we’ve done throughout the rest of the year, and coming one step closer to completion, peace, and fulfillment - all of which, by the way, share the same Hebrew root, “shalom”.

That is the magic of summer, the sense of wonderment that fills the air each year as this long awaited season draws nearer. We innately know that something great is coming and that during the summer we will have the chance to put the finishing touches on our year and on ourselves, to bring ourselves to completion and achieve fulfillment. Perhaps this is why during Tisha B’Av - the other Jewish holiday which falls during the summer - the liturgy begins with images of sadness and mourning, but ends on the positive note: that someday in future, the messianic arrival will take place on this day, flipping it into day of great happiness. Even the anticipation of an era when we’ve reached peak “shalom” -- completion, peace and fulfillment -- is a source of joy when times get tough.

When a teen decides to participate in a Jewish summer experience, they are making a decision to complete their year in a Jewish way, to find their purpose in life through a Jewish lens, and to find fulfillment and completion in Jewish tradition. That’s a big deal.

But how does one prepare for such an experience? The summer is the culmination of the entire year, and indeed, our entire lives up until that point. At Next Step Israel Internships, in order to prepare our students before they even get on the plane, our interview and preparation process challenges them to reflect on the year-to-date and their life goals. Once they get off the plane, we jump straight into to touring sites in Israel that push students to ask hard questions about fulfillment and completion.

The next step is the hard part, actually using the summer to implement these answers in real life and bringing themselves closer to their vision of fulfillment and completion. We'll do this by building community, asking hard questions, creating rituals, new habits and meaningful experiences, all the while constantly reflecting in order to actively implement the answers to those hard questions into our daily lives.

When the summer is complete, we will have taken a life changing journey together and all be better for it.

Especially once we internalize the full meaning -- and joy -- of “summer.”

Rabbi Adam Simon is the Director of Next Step Israel Internships, a joint program of the New York Teen Initiative and NCSY, the international youth movement of the Orthodox Union.