When Preschoolers Use Robots for Tikkun Olam 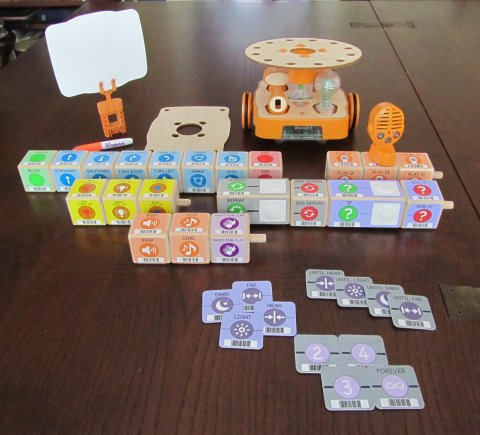 What happens when a pack of robots come to a school to help preschoolers clean up the environment and engage in tikkun olam (repairing the world)?

This isn’t the Jewish sequel of Pixar’s Wall-E.

This is what happened at the PJ Pals Earth Day event. An initiative of the Lander Grinspoon Academy, PJ Pals brings together families with kids ages 3-5 for stories, activities, and schmoozing.

As far as robotics programs go, this one was simple. After an opening story, the families met the KIBO robots. They learned by exploring the parts, creating simple sequences, and carrying out basic tasks such as forward and backward movement. Questions were abound, perhaps more so from the parents than the children.

Families were then given the option to use KIBOs to act out scenes from the story—raking up leaves, moving water bottles to a recycling bin, and walking (stuffed) dogs from the shelter.

By this point, you might be wondering, “Why robots?”

The KIBO robots were specially developed by the Dev Tech Group at Tufts University for young children and exemplify what Dr. Marina Bers calls Positive Technology Development. In an age where most are familiar with the negative consequences of youth using technology—cyberbullying, excessive screen time, and decreased familial interaction—we also need to focus on the positive attributes that emerge when children use new educational technologies.

If we want children who are competent and confident, give them chances to create content and express their creativity using coding programs such as Scratch, Jr. Want caring children who can connect to others? Have them work collaboratively on robotics kids where they need to communicate with others. When children share their maker-space creations and learn from the projects of their peers, they are building community and developing the ability to make strong conduct choices.

I’d argue these are the core traits and behaviors that parents and educators alike try to teach children.

So how did these behaviors play out at the PJ Pals event?

This may sound too good to be true. There are indeed challenges to introducing these technologies to the youngest students.

Training educators, a theme that most readers of this blog encounter frequently, is crucial to this work. It takes time to learn the technologies themselves, but it’s not only about knowing how to use a robot or write a sequence of code. It’s shifting your mindset to see technology not as an additive subject to teach but as a tool that can integrate with and enhance existing learning goals.

Parents can also be an impediment in advancing this work. Many parents have trepidation about tools they don’t understand. Parents generally know that reading to their children is crucial for literacy development. And thankfully most parents can read better than their preschoolers. But what happens when a parent doesn’t know as much about technology as their 5-year old? How can parents be supportive of their child’s explorations if they don’t know what the kids are even talking about? We’ve yet to see large scale initiatives that include parent learning as part of a school’s technology curriculum.

It’s why PJ Pals was remarkable in my mind. Together, everyone in the room was able to learn with and from each other—parent, child and educators. That in itself might be one small step toward doing the hard work of tikkun olam.

Thank you to the Wexner Foundation and Jim Joseph Foundation for their support through the Wexner Field Fellowship, which is allowing me to study with the Dev Tech Group.

Meredith Lewis is the Director of Content and Engagement at PJ Library. Meredith has also worked as an online editor, writer, manager, youth group director, and teacher. She holds an MPA and a MA in Hebrew and Judaic Studies from New York University, and a BS in Journalism from Northwestern University. She is currently pursuing a certificate in Early Childhood Technology at Tufts University. Meredith and her husband Ben live in Northampton, MA with their two children, Ari and Micah.