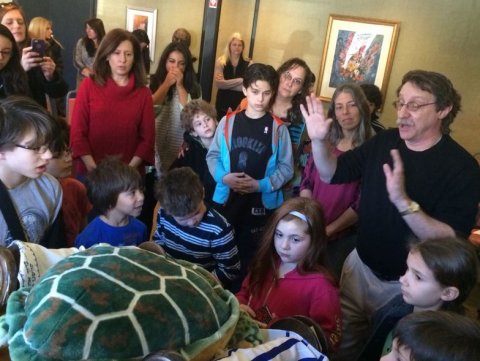 CTI Limud is a congregation-wide learning model that is based on the premise that Jewish values, embedded in and learned through our stories (both modern and ancient), can be our guide in helping us to make our world a better place. All CTI learners and their families participate in hands-on experiential learning on topics that include: community building, prayer, storytelling, Israel, camp connections, leadership and Torah study. Learning takes place at CTI, in congregants’ homes as well as out in community.

Who are the Learners?

Who are the Educators/Learning Facilitators?

Educators include the rabbi, the cantor, the education director, a lead Hebrew teacher, a graduate student in Jewish Education from HUC who is interning at CTI, two additional teachers, parents, madrichim (counselors, leaders) and congregants.

When Does the Learning Happen?

Where Does the Learning Happen?

What is the Learning? How is it Designed?

What Were You Trying to Achieve with this Model?

Role of governance and Clergy:

How Do You Describe Your Congregation?

CTI is a liberal Conservative congregation. There are approximately 200 member units in the congregation, with 70 children and 40 families participating in Limud. There is one rabbi and one cantor. A volunteer lay leader has served as the education director; this year, CTI has hired a new education director. The teaching staff comprises the rabbi, the cantor, the Education Director, six teachers and three one-on-one special education aides. The congregation’s priority goal is for learners of all ages to be on personal journeys towards lives that are actively engaged with the Jewish community and the world at large.

Facilitator:
Suri Jacknis
This continuing network will help you develop best practices in the field of family education. You will set your own goals for enhancing your model of family learning, for experimenting with various strategies to engage the whole family, and /or for increasing parental/family engagement in Jewish experiences and learning. Together we will consider ways to help parents and families see Judaism as a gift that can add connections, meaning, and joy to their lives. In this way, more Jewish children and families will thrive as human beings and as Jews.