Not all models fit neatly into one of our major groups (or “buckets”). As new innovations emerge and new experiments are designed, we envision more models may cross-over or be outside of these buckets. In the future we will most likely identify new groupings based on the success of these models.

J-JEP is a multi-denominational collaboration between Beth Shalom, a traditional Conservative congregation and Rodef Shalom, a Classical Reform congregation. All learners in K-7 meet on Sunday mornings for Judaic studies and tefillah. In addition to this time on Sunday, each learner in grades 2-7 participates in one of four Hebrew tracks. 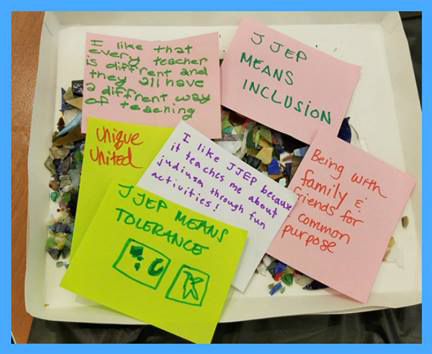 The learning in J-JEP reflects the belief that no two households are the same. This is seen in Judaic studies and tefillah as learners are consistently introduced to both the Reform and Conservative ideologies, rituals and liturgy. In alignment with this view, J-JEP incorporates choice-based learning. For Hebrew, learners choose from four distinct Hebrew programs, each with its own unique goals and pedagogic structure. Three of the Hebrew programs (Family, Conversational and Liturgical, Liturgical Hebrew) are held at one of the congregations and a fourth option is online.

The primary goals of J-JEP are for Jewish values to be integrated be in all things the learners do and for learners to experience and appreciate that Judaism lives outside the walls of the congregation.

These goals, combined with the belief that each household is unique, led J-JEP to develop an individualized digital badge system based on “discover, play and create.”

Click here for an article about BadgeQuest published on eJewish Philanthropy.

(See “What is the Learning?” below for more detail on Hebrew learning and BadgeQuest.)

What Were You Trying to Achieve with this Model?

The seeds of this model began when the two congregations recognized that they each needed to better meet the needs of the 7th graders and that they wanted to try something new to address these needs. This grew from an experiment with the 7th grade into a full K-7 model.

In the fall of 2011, the congregations began with a pilot for the 7th graders. The learners participated in a variety of 6-week long seminars throughout the year. In order to learn from the pilot, the education team gathered data from all participants. The data showed that:

The following year, (fall 2012) J-JEP was officially launched. It began with the idea that all K-7 students would come together for Judaic studies on Sundays for 2.5 hours; formal Hebrew studies would take place outside of this time.

A task force was formed to help create guidelines for J-JEP. The task force developed an FAQ that addressed questions around key issues such as wearing kippot, observing kashrut and “Who is a Jew?” Having this FAQ developed by both congregations has avoided issues around potential areas of conflict. Decisions honor both the Conservative and Reform approaches and follow “minhag habayit,” house rules, at each of the congregations. For example, when learning takes place at the Conservative congregation, kippot are worn, while wearing a kippah is optional at the Reform congregation.

During the first year of J-JEP there were two educational directors, one from each congregation. Since the fall of 2013, at the start of J-JEP’s second official year, the program has been led by one J-JEP director.

In 2013, an education taskforce made up of the director, rabbis, J-JEP educators and lay leaders also started to research what was happening in religious and in public schools to learn about best practices in the field. They then applied what they learned from the research to continue to develop J-JEP.

J-JEP is the sole educational model for both congregations.

Role of Governance and Clergy:

The J-JEP Director works with 3 rabbis: the Beth Shalom senior rabbi and two rabbis from Rodef Shalom. Each rabbi contributes in a unique way. One is a visionary, who thinks wider; a second rabbi is very hands on and leads services every Sunday; and the third rabbi teaches classes for children and electives for parents.

There is a J-JEP committee made up of 11 members. Each congregation has its Senior Rabbi, president of the board, a co-chair, and two lay people serve on the committee; the committee is evenly divided between the two congregations. The committee also includes the J-JEP Director.

J-JEP has a large budget, about $250,000. The two congregations pay in equal amounts for J-JEP. They had initially tried to have the contribution based on enrollment from the respective congregations, but this became too complicated.

The J-JEP Director noted that the program continues to evolve.

How Do You Describe Your Congregation?

Congregation Rodef Shalom is a Reform congregation with approximately 880 family memberships. They have two rabbis and a cantorial soloist.

Model Adaptation
Multi-aged, Project-Based, Experiential Learning: Mayim
Mayim, our initial example of "Additional" Models, could be placed in a Multi-aged, Project-Based Learning, or Experiential Learning bucket. Mayim is a K-5 learning community in which depth of relationships and depth of learning are intentionally fostered and visible everywhere.
View Model Adaptation
Model
The Choice-Based Learning Model
Congregations establish a set of broad learning requirements and opportunities for fulfilling them. Choices include time, content and approach to learning. A list of Choice-Based Learning Models has been assembled here.
View Model